Swing Out Sisters and Brothers 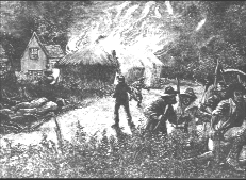 Protests without leaders - the Arab spring, the Spanish Indignants, the Occupy movement – are a product of the digital era. With no single person or group having ownership or rights to the name, it is a franchise of rebellion that can be used by anybody, anywhere and at anytime, allowing protests to grow in size and spread to other areas; a truly modern phenomenon that gives voice to the voiceless against the forces of wealth and power and one that could never have taken place without the proliferation of social networks in the internet age. Except that the Swing Riots that took place in rural Sussex in the autumn of 1830 were just that: a rapidly spreading outbreak of dissent that united poor farm labourers, under the banner of the mythical figure of Captain Swing, against the oppression of the landed class.

Farm labourers at that time would earn very little money but would receive a large part of their wages in kind as food and accommodation. Threshing – literally separating the wheat from the chaff – was work that took place on the farm between November and January and was the bridge between harvest-time and sowing that meant secure, year round employment. There was nothing idyllic about this life: it was a subsistence existence of hard, physical work and little pleasure.

And then along came the threshing machine. The mechanisation of the labourers’ winter work provided an opportunity for further rationalisation, leading farmers to offer lower wages for the human element of the process of threshing and laying off workers in the harshest months of the year. The machines represented a dire threat to already low wages and job security.

The uprising began in Kent. Mobs would break into farms, search for the threshing machines and destroy them. This spread panic amongst landowners who soon began to receive letters, signed ‘Captain Swing’, demanding that the machines be destroyed else barns, houses and haystacks would be fired. Many acquiesced, those that did not found out that the threat was not an empty one.

The rebellion quickly spread into Sussex as more acted under the name of Captain Swing; he did not exist, of course, but became a figure of fear and his name was taken up and widely used to give power to the worker’s campaign against reduced wages and seasonal employment.

As rioting spread westwards, the military were called in and stationed at Uckfield. Hundreds of rioters were prosecuted and a few were hanged; most received long prison sentences or were transported to Australia.

The rioters were not revolutionaries but simply wanted to protect their existing conditions of employment against creeping capitalism. Captain Swing gave a voice to the very weakest - the rural poor – and in many cases he was able to ensure that landowners did negotiate with the workers. Agricultural wages rose in the southern counties of England as a result of the protests and many of the destroyed machines were not replaced. The Captain Swing riots of 1830 represented the last major revolt of agricultural workers in England but his spirit lives on in those leaderless expressions of protest that we see spreading through the digital world today.
Posted by Andrew Watson at 12:40 PM No comments: 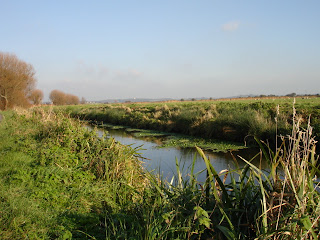 It is a bright Sunday morning and I am on the Pevensey Levels. The landscape is a sliver in front of me; I can pick out the form of Pevensey Castle, some three miles distant, dwarfed by an endless spring sky with only a whisper of cloud too insignificant to deter the warmth of the early sunshine. The sky dominates in these flat lands. 10,000 years ago they were sea; a thousand years ago they were marshland. Kipling immortalised this landscape in Puck of Pook’s Hill: “Salt Marsh where now is corn… And so was England born.” In reality, it is still too wet here for arable farming but some modern day English yeoman has ensured that I skirt fields of grazed pasture. Sheikh Abed Gulzar, an Eastbourne hotelier, has acquired and tidied-up farmland on the Levels but has upset the parish council and divided local opinion in the process: first, with white, four foot high lion statues at the farm entrances; second, with large Union Jacks flown in place of the lions after their removal because of lack of planning permission. Some see his eccentricities as an eyesore; some as typically English.

As the cattle turn to watch my approach, I feel like Pip with the stolen wittles in David Lean’s 1948 version of Great Expectations; but these cows don’t intrude upon my solitude. I have seen no-one since I walked out of the woods at Herstmonceux Castle and there is only the sound of the south-westerly wind and the calls of the peewits about my ears. Behind me, the church spire and the observatory dome are my navigation points. Negotiating the maze of free flowing and intersecting ditches can take the most experienced walker off course. Before now, heading for Rickney in mist, it has become Brigadoon and I have found myself by-passing it altogether, drifting eastwards and stumbling on to the Wartling Road. Its unknowable nature is what brings me back, time and again, to this landscape. There is no shame in losing yourself once in a while.
Posted by Andrew Watson at 9:02 PM No comments:

Windmills of My Mind 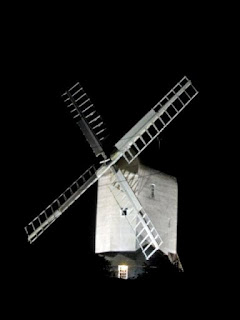 Being brought up on a diet of black and white films - back in my formative years the BBC daytime schedules were not full of programmes about the crap in your attic or vicarious house hunting - has had many personal consequences: a disregard for authority instilled in me by too many Ealing comedies; a reputation for being recondite that is useless, except in pub quizzes; and a disconcertion when it comes to windmills.

Alfred Hitchcock’s 1940 spy thriller Foreign Correspondent left an indelible mark. Starring the American Joel McCrea and supported by the urbane and English George Sanders, the perpetual chase of the film at one point leads to a Dutch landscape overpopulated by slowly turning windmills. The tension of the scene, as McCrea secretly observes the menace of the kidnappers of the drugged diplomat Van Meer behind the ostensibly benign façade of one of the windmills, terrified me; but only as much as the strange, dead ambience of a Hollywood studio set masquerading as countryside. Since then windmills have been a symbol of hidden menace. A fear, I fear, I have passed on to one of my sons who, from the age of two, could not walk past our local windmill. Often we would walk up the hill, only for him to panic and refuse to go on as the mill came in full sight, just like Michael Palin’s teacher character in Alan Bleasedale’s GBH who, everytime he had to cross a bridge, froze.

Our local windmill is magnificent: in a county renowned for windmills the Windmill Hill windmill is the tallest in Sussex and the second tallest in Britain. Built in 1814, it is one of the remaining examples of a post mill in its original condition. After a chequered ownership throughout the second half of the twentieth century, a trust acquired the mill in 1995 and completed a ten-year programme of restoration with funding from the Heritage Lottery Fund, English Heritage and county and district councils.

A post mill is a timber building supported on a vertical post which acts as a pivot so that the mill can be turned to face the wind. When we first moved here my ignorance led to confusion: every time I glanced up at the windmill, it seemed to be facing a different way; that’s because it was. The mill is now open to visitors on out-of-winter Sunday afternoons and some extra days on bank holiday weekends, with entrance by donation.

My son has overcome his fear: he has not just walked past the mill but been inside it and climbed all the way to the top with me. That was an exhilarating experience but I had the scene from Foreign Correspondent in my mind all the time. I think that the Windmill Hill windmill is best enjoyed after dark when it is beautifully lit and I can see its white, spectral shape against the night sky from behind the safety of my window.
Posted by Andrew Watson at 11:27 PM 3 comments: