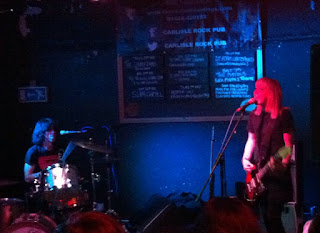 There was a wonderful moment in the middle of The Lovely Eggs set in Hastings last night: in celebration of the band's anniversary, they play a couple of quick 'old' numbers; the thirteen-seconds-long Muhammad Ali And All His Friends segues into the twenty second burst of fury that is I'm A Journalist. The latter, singer and guitarist Holly Ross says, is for anyone who has a shitty job. After asking the audience who has a job they hate, they then repeat the song with personalised lyrics for a civil servant called Keith - only at a Lovely Eggs gig would this happen.

The Lancaster punk duo - Ross and partner David Blackwell on drums - have been around for 10 years, releasing four small-label albums, a raft of singles and gigging regularly to critical acclaim. But despite the connections and endorsements - Gruff Rhys has produced them, Chris Packham adores them - they have stayed faithful to their "we do exactly what we like" ethos and remain a true underground band. Having seen them perform at the Green Man festival in Wales last summer, it was a delight that one of the 12 dates on their UK tour was just down the road at the Carlisle, the rock pub on Hastings seafront.

"We like your town," they tell us of their first visit to the Sussex seaside resort. They have spent a lovely day eating Morrisons' sandwiches in Alexandra Park - they were surprised that it is just as bloody cold down here as it is up north - and having their tea in Super Pizza. They have their three-year-old son on tour with them and they'll be up again at six in the morning - so no moaning from the audience about gigs on a work night.

There are those in the boozy crowd who are new to The Lovely Eggs, but they are clearly captivated from the beginning by the clever, funny and touching lyrics and the sheer joyous racket that two musicians are able to make; wherever I look, I see smiling faces. Fuck It, I Just Want Someone To Fall In Love With and People Are Twats are instant singalongs and touch upon universal themes; and as if to prove the point, a twat wanders onto the stage towards the end of the set only to be sent away with a flea in his ear from Holly. With no fake encore (see their website and sign the petition), the hilarious and ever-popular Don't Look At Me - "look at us with our red wine smiles" - provides the rousing finale.

Earlier in the evening, local band The Sine Waves had treated us to a highly impressive collection of space-age surf punk instrumentals. With lab coats, masks and some interesting radiophonic sound effects, they seemed as though they had stumbled straight off the set of The Quatermass Experiment.

Posted by Andrew Watson at 2:30 PM No comments: 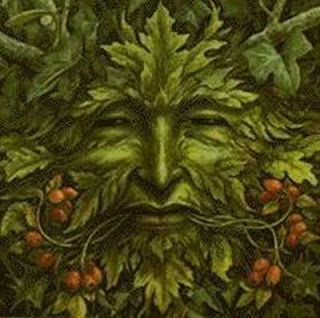 A male face, with a beard of foliage, peers out of a surrounding of leaves and vines with narrowed eyes and an expression that is either anger or laughter; the folkloric figure of the Green Man is hard to define. Ostensibly a pagan symbol of fertility or a sprit of nature, he is most often found carved in wood or stone as an architectural ornament in churches - or on the signs of many eponymous pubs.

As an emblem of rebirth associated with the growth of spring and the onset of summer, the Green Man is also something of a Puckish figure. Robin Hood and Peter Pan are sometimes claimed as distant relations, as is the Green Knight from Sir Gawain and the Green Knight. In this 14th century Arthurian romance, Sir Gawain is challenged and tested by the laughing knight who, at the tale's conclusion, is revealed to be something of a shape-shifting trickster.

A closer relation of the Green Man is Jack in the Green. The English tradition of making garlands for participants in May Day parades developed, in the 17th century, to the extent that the leader became covered from head to foot in flowers and leaves; this figure became known as Jack in the Green, a riotous and ribald character. The Victorians frowned on such anarchic behaviour, of course, and May Day parades were sanitised as Jack was supplanted by the more anodyne May Queen.

In recent years, however, there has been a resurgence: mostly revived by local Morris dancers, there are now a dozen Jack in the Green parades that take place throughout southern England each May Day. The most prominent are at Deptford in London, Whitstable in Kent and Hastings.

Hastings' Jack in the Green May Day festival is a four-day hedonistic affair in the Old Town area of the East Sussex resort. The long weekend of merriment, music and Morris dancing includes performances by the Copper Family and Now and Then, and culminates on the Bank Holiday Monday with a wild costumed parade. Setting off in the morning from the fishermen's huts at Rock-a-Nore, Jack is attended by his mischief-making Bogies and other characters, such as Black Sal. The procession finishes with revels on West Hill and the day concludes with the slaying of Jack to release the spirit of summer.

Hastings Jack in the Green May Day Festival is on 29th April - 2nd May 2016. There is more information here.

Posted by Andrew Watson at 5:51 PM No comments:

Email ThisBlogThis!Share to TwitterShare to FacebookShare to Pinterest
Labels: Green Man, Hastings, Jack in the Green, Rock-a-Nore, Sir Gawain and the Green Knight 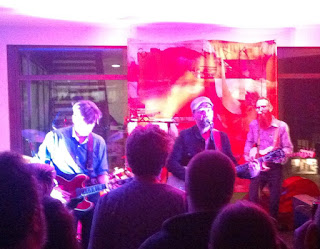 The last time that Ben Watt was in Bexhill-on-Sea was for an in-store performance at the Music's Not Dead record shop to promote his 2014 album, Hendra. So impressed must he have been with people and place that day, that he returned to Bexhill last night to open the tour for his follow-up album, Fever Dream, with a Music's Not Dead-promoted gig at the De La Warr Pavilion. Watt says that he has had his arm twisted by shop proprietor, Del, into starting his world tour here and his band’s next stops will be London and Tokyo. Such is the bathetic life of international musicians: today Bexhill, tomorrow the world.

Although Bexhill is getting used to visits from big names these days - John Lydon's Public Image a few months ago, Tom Verlaine's Television soon – we are not too spoilt to be thrilled that Watt has Bernard Butler in tow as part of his band, along with sometime Everything But The Girl drummer Martin Ditcham and Aussie jazz bassist, Rex Horan. This is the band that recorded the new album and they sound like a tight unit from the off. The interplay between Watt and Butler’s guitars is a delight and Horan, mostly playing upright bass, underpins their folk/jazz/rock sound perfectly.

Opening with Bricks and Wood from Fever Dream, the new album is complemented with regular double backs into Hendra: Young Man’s Game and Golden Ratio follow before Faces of My Friends and the excellent Between Two Fires provide an indication of how good Watt’s new songs are. Having had a 30-year break in solo activity after his debut North Marine Drive in 1983, Watt has now produced two albums in three years. Explaining this, he recently said, "I felt compelled to write more...I feel I have somehow tapped into a nucleus of myself again lately."

The lively Nathaniel, one of my favourites of the 2014 crop of songs, then ushers-in recent single Gradually, a tender meditation on love growing apart slowly over time, with its desperate refrain of “barely getting through”. After more new material, there are two of the most delicate songs from Hendra – the title track and The Levels - that deal with bereavement after the loss of Watt’s sister.

The set builds to a close with a pair of older songs – 25th December, from Everything But The Girl’s Amplified Heart album, and the beautiful Some Things Don’t Matter from North Marine Drive – before finishing with Fever Dream. On the new album, the title track has a contribution from Hiss Golden Messenger's M.C. Taylor and one of the encores, New Year of Grace, features a Marissa Nadler vocal. The second encore, and final song of an exceptional night, is the piano-led Forget with the pertinent line, “the Sussex Downs after rainfall is as lovely as it gets.” How could Tokyo compete with that?

Fever Dreams is released on 8 April 2016 on Unmade Road.

Posted by Andrew Watson at 8:51 AM No comments: