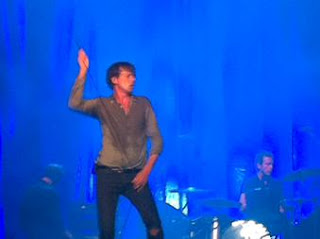 When Suede played the opening bars to the gorgeous By The Sea at Bexill-on-Sea's De La Warr Pavilion last night, Brett Anderson allowed himself a wry grin and told us, "we had to play this tonight". And perhaps not just because of the coastal setting, but because it is one of the best of those sumptuous Suede ballads that manage to be both uplifting and melancholy at the same time. With a repertoire of such quality, it must be a difficult task for the band to decide what to leave out of their set.

Anderson asks us for our indulgence in the first part as they run through some less obvious song choices but all with that trademark loose and dirty guitar sound, as if Mick Ronson had been in a punk band. That sound was first heard on their clutch of early records, and it is from the B sides of those singles and their most recent album, 2013's Bloodsports, that the opening numbers are drawn.

If not all of the crowd are familiar with Suede's earliest and latest material, this has no effect on the thrilling atmosphere. Anderson prowls the stage between the glam racket of Richard Oakes and Neil Codling's guitars and the rumble of silhouetted pair Mat Osman and Simon Gilbert's rhythm, whipping the air with the microphone lead and clearly having fun. The gear-change for the audience comes with Filmstar, from 1996's Coming Up, which is greeted with wild hysteria. Suede's third album was made after Bernard Butler had left the band; producing five top ten singles, and with all the other tracks sounding like hits, it was the band's biggest album. They could have played it in its entirety and garnered a similar reaction to every song. As it is, we have to settle for three more.

We also get those early singles - So Young, Metal Mickey and Animal Nitrate - which reminds me of the salvation the band brought. The early 1990s was a fairly arid time for new alternative music: the interregnum between the end of Madchester and the birth of Britpop was filled with the imported self-loathing of grunge, or even poorer domestic facsimiles. That music lacked grace, style and humour, and seemed to be only a hairsbreadth away from the male posturing of heavy metal. Then, enter Suede. Fronted by an androgynous council house back bedroom dreamer, and with a swift-wristed rock 'n' roll guitarist at his side, they dispelled the drabness of the Seattle sound with an injection of energy and urban poetry - "through the slippery city we ride/skyline swine on the circuit" - that paved the way for a British resurgence.

Having played a lengthy set, Suede return to the stage for an encore composed of a triptych of songs from arguably their greatest album, Dog Man Star: the beautifully tender, The 2 of Us - "Watching my mistakes/I listened to the band" - is followed by the sexual hollowness of The Asphalt World; and then, finally, the symphonic crescendo of Still Life sends us away, "into the night".

Posted by Andrew Watson at 5:38 PM No comments: 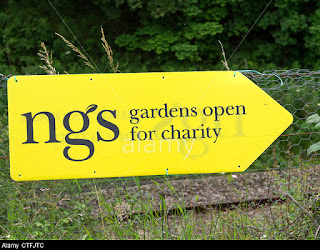 This weekend for the second year running, the rural allotment site where I and many of my friends and neighbours grow vegetables will be part of the National Gardens Scheme (NGS). Coming in between the tranquillity of Cowbeech House and the artistic landscaping of Two Acres, visitors will be able to stroll around the 54-plot Herstmonceux Parish Allotments, in the idyllic setting of Greenways Fruit Farm, as part of a trail of gardens open to the public.

The NGS has been in operation since 1927. In that year, 609 individuals opened up their gardens at the cost of a shilling a head and the £8,000 raised was used to support the national network of District Nurses. That voluntary network had been started 70 years earlier by Liverpool merchant, William Rathbone, to train and employ nurses to work in deprived areas.

In the 1930s, the scheme grew and Country Life magazine began to publish a bright yellow guide to the thousand open gardens each year. That colour is inextricably linked with the NGS today, and The Yellow Book is still the handbook of the annual calendar of open days. With the birth of the National Health Service in 1948, the District Nursing Service became part of fully-funded state provision but the NGS continued to raise money for other nursing and care charities.

Today, the NGS raises £2.5m a year for the Carers Trust and cancer charities Macmillan and Marie Curie, amongst others, and there are nearly 4,000 gardens participating in the scheme each year. For a small donation at our ‘garden’ on Saturday or Sunday, people will be able to see the pristine plots of those with plenty of time to care, the practical plots of those who just want to get food out of the ground and the creativity of those allotments that have ponds and pergolas.

Details of the Herstmonceux Parish Trail can be found here.

Posted by Andrew Watson at 11:10 PM No comments: 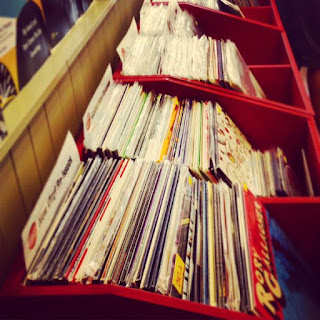 Demand for new music on vinyl is on the increase: it has been steadily rising over recent years and sales are now back to their 1997 level, helped in part by April’s annual Record Store Day, when special vinyl releases by bands are much sought after. There may have been over a million vinyl sales last year but it still only accounts for 2% of the music market. Whoever the buyers are, it is still a niche area: I am sure there are some diehards who have never stopped buying vinyl and others who have returned to it; and there are undoubtedly younger music fans, raised on digital and not having known music in a physical form, who are responding to the retro appeal of records and turntables.

Even though I still listen to vinyl, I am not part of this new revolution. The sad pedant in me likes to keep my music collection compartmentalised: I have a strict line in the sand for when vinyl ended. I resisted the CD revolution of the mid-1980s and persisted with records until the early 90s when they became an increasingly marginalised format. The difficulty of finding new releases on vinyl made me finally relent. The last two vinyl albums in my chronologically arranged collection are The End of the Surrey People by Vic Godard and Sabresonic by the Sabres of Paradise. This dates my vinyl surrender to 1993 - when I made the switch to cassettes. This was just bloody-mindedness on my part and clearly did not last long as the first CD I bought was Dummy by Portishead, released in 1994. And it didn’t help that I had most of the cassettes stolen when my car got nicked. So, I have a strict format divide when buying music: anything released in 1993, or earlier, I have to buy on vinyl; anything released in 1994, or later has to be on CD.

Having been very briefly tempted by the digital age, I have chosen to shun iTunes and Spotify and I buy all my new music on CD from the wonderful Music's Not Dead shop in Bexhill; but I have never stopped trawling through the racks of charity shops and - increasingly rarely - second-hand record establishments to fill in those pre-94 gaps. Whether through sentimentality or regret, I have spent a reasonable amount of time over the last fifteen years hunting down a mental list of vinyl albums that I never bought at the time or, more usually, that I had but they fell from my clutches - either stolen, lost or sold.

When I was a young person, albums were a fluid currency, a commodity to be pawned: if you needed a few quid quickly, second-hand record shops, where you could sell a couple of albums, were legion. There were many gigs that I attended in the 70s and 80s that were funded by the proceeds of hastily sold albums. More often than not, I would pick up another second-hand copy a few weeks later; but some slipped through the net and over recent years I rectified this when I stumbled across copies of albums such as Raw Power, The Image Has Cracked and Soul Mining. The list is a lot shorter now but it still contains the first Roxy Music album, the New York Doll's Too Much Too Soon, Two Sevens Clash by Culture (how many levels of idiocy was I operating on the day I sold that one?) and The Pogues' Rum, Sodomy and the Lash. I am sure I could buy these over the internet at a click but that's not the point. It would deprive me of going to places like The Vinyl Frontier in Eastbourne.

Recently relocated from the Old Town area to the Little Chelsea quarter of Eastbourne, The Vinyl Frontier specialises in new, used and rare vinyl. In spacious and light-filled premises with a cafe area at the back, the shop boasts a large stock of used vinyl for the dedicated browswer. With rare time to spare before collecting the kids from sporting activities, I spent a glorious half an hour on Saturday morning rack-flicking. There was nothing from my mental list but I was tempted by Elvis Costello's My Aim is True, an LP I never bought at the time on the grounds that he wasn't "punk enough". That was until I saw a copy of Eden, Everything But The Girl's sumptuous debut album. I recalled playing that LP to death in a grotty South London flat throughout 1984 but didn't seem to possess it anymore. Then I remembered: I lost custody of all the Everything But The Girl albums at the closing of a former life, along with many others. Now, there's a whole new excuse to search for old vinyl...

Posted by Andrew Watson at 5:17 PM No comments: