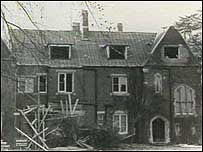 Grants Hill House in Uckfield, East Sussex was the place of the last confirmed sighting, in 1974, of perhaps this county’s most famous disappeared person, John Bingham. He arrived at the home of his friends Ian and Susan Maxwell-Scott, on Thursday 7th November, in a dishevelled and bloodstained state. Only Susan was at home to hear Bingham tell a distressing tale of how he had been walking past his estranged wife’s home in London’s Belgravia and had seen her, through the window, struggling with a man in the basement kitchen. He had scared the intruder off only to discover the bloody murder of his children’s nanny. He had tried to calm his wife but she had run into the street crying, “Murder!” Deciding that the scene reflected badly on him, he had fled.

Bingham was, of course, better known as Lord Lucan and his account of events was a complete fabrication. Despite a long campaign to portray his wife as mentally ill and an unfit mother, Lucan had lost custody of the children to her in an acrimonious court case the previous year. It was he who had murdered the nanny, Sandra Rivett, mistaking her for his wife in the dark. He had then violently attacked Lady Lucan but she had put up a fight and escaped to a nearby pub to raise the alarm. He had driven, in a borrowed car, to East Sussex.

Having arrived at Grants Hill House at a late hour, Lucan could not be persuaded by Maxwell-Scott to stay the night and go to the local police in the morning. Instead, he drove away in the early hours saying that he had to get back to London. He did not arrive and the car was found three days later, abandoned in the Sussex port of Newhaven; Lucan was never seen again. He was declared dead in 1999 and a certificate was finally issued last year. There were countless theories and unconfirmed sightings before then: he jumped from a cross-channel ferry; he flew to France from a Kentish airfield; he lived out his days in the southern African country of Mozambique.

However, there is one theory that places Lucan’s demise closer to home. In the late 1990s, Sussex police received a series of anonymous phone calls from someone who said they had been in the grounds of Grants Hill House on the night of 7th November 1974. The witness claimed to have seen two men shoot a third and dump his body in a cesspit. The caller refused to make a proper statement and the information was not acted upon. As the house had been demolished and the grounds redeveloped in the 1980s, a search for remains would have been difficult; but it might be that Grants Hill House is not only the place of Lucan’s last sighting, but his last resting place.

Posted by Andrew Watson at 2:50 PM No comments: 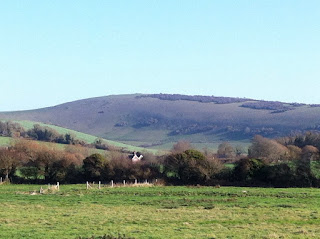 Exactly a year ago, when I was writing about the obsolete word apricity - used to describe the warmth of the sun in winter - I was admonished by a correspondent who pointed out that, as meteorological winter did not begin for another week, I could not have felt the winter sun. My response was that there was frost on the ground, it was bloody cold and therefore, to my mind, it was winter and what little warmth the sun gave me was apricity.

Walking in the countryside around Alfriston yesterday, I could not make the same claim. Yes, the sun's rays were shining down but it did not feel at all like winter. With December just around the corner, it was a mild morning and, with the exception of the odd cold day, typical of how the weather has been for weeks, now. Worryingly, it is as if the climate became fixed in early October.

It all made for an idyllic walk as we left Waterloo Square in the centre of Alfriston and headed down to the Cuckmere River to follow its winding course away from the village and toward the sun. Apart from a cloud of smoke from a tree-feller's bonfire, the sky was clear blue and the gentle downland surrounding the valley a vivid green. This is the landscape that inspired the author Eleanor Farjeon to write the hymn Morning Has Broken in 1931; it could have been on such a day that she penned the line, "mine is the sunlight, mine is the morning".

Despite the weather putting a spring in our step, the path on the western bank was well trodden and muddy so, as we arrived at our turning point - the Litlington White Horse high above us on Hindover Hill - we crossed the river for the less heavy-going eastern side. The firmer ground underfoot and the sun at our backs both hastened our return to the village for a midday retirement to the pub.
Posted by Andrew Watson at 6:35 AM No comments: 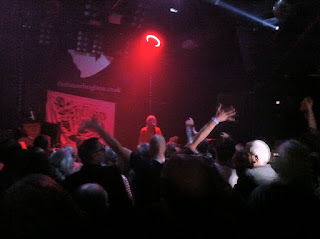 As soon as I got into The Haunt in Brighton, last night, there was something in the air. It wasn’t just the smell of sweat and damp in this cramped venue, there was an atmosphere, a buzz about the place. Whatever it was, it felt like a proper gig even before any band had come on stage. Despite it being early – to accommodate a 10pm finish - the audience seemed pretty boozed and there was a high proportion of ne’er do wells with a glint in their eye. When the music started, Welsh support band Seazoo were on and off in the blink of an eye but they made a joyful racket which cranked up the mood even more. We had no time to catch breath before they were very swiftly followed by the very lovely The Lovely Eggs. Perhaps the early finish was stoking the crowd: everything was condensed - we had to get our thrills while we could.

And thrill us The Lovely Eggs did. The harder edge that has always been in the Eggs’ music seems to be more to the fore, now. Songs like Goofin’ Around and The Magic Onion, from 2015’s This Is Our Nowhere, display a Sonic Youth influence on Holly’s guitar sound. These are longer songs and new material such as current single, I Shouldn’t Have Said That, and tracks from next year’s new album seem to be in the same vein. The sound was exhilarating, with David’s pounding driving it along under Holly’s fuzzbox guitar. Whether new songs or old favourites like Fuck It, the crowd were lapping them up and I could feel the floor bouncing under my feet.

Holly added to the atmosphere with a bit of audience manipulation: relegating the front row arm-folders further back, she brought forward the people who were partying the most; the atmosphere got even wilder. But the longer the set went on, the more Holly was struggling with her voice on the penultimate date of the tour. Despite this, when the set finished, they came back for an encore. Yes, an encore - their first in three years. The Lovely Eggs have long been opposed to fake encores, the kind where the songs are already on the set list and the band crouch at the side of the stage like “cavemen doing a shit” before going back on a few moments later. But last night in Brighton there was a real, spontaneous singalong encore of Don’t Look At Me to end the punk rock party.

Posted by Andrew Watson at 4:58 PM No comments: