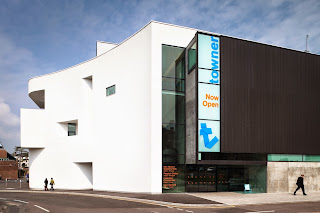 The East Sussex Open is an annual exhibition, at Eastbourne’s Towner contemporary art museum, to showcase artists from across the county. Based in the largest gallery space in the area, the ground floor Exhibition Halls, it always provides a wide and interesting mixture of artistic forms; and the 2014 selection, ranging from traditional painting to large installations, does not deviate from this stimulating breadth of media.

Having to entertain the kids for the whole day on Saturday, I gambled on children’s intuitive appreciation of art to help me navigate this year’s collection. Whilst I was taking in Susan Crossett’s watercolours of rural landscapes, and Tom Banks’ eerie dark and depopulated St. Leonards’ street scenes, the kids were fighting over who should wear the headphones to accompany Flats, Gallit Shaltiel’s stop motion animation of a man trapped in a concrete structure.

It is perhaps a given that moving images and three-dimensional pieces will appeal more to younger minds; but whilst I was drawn to David Jones’ video installation, Jacob’s Ladder, an endless loop of empty London Underground escalator advertising frames, and the humour of Sam Carvosso’s Sculpture Falling on Lemon, the children were studying photographer Alex Currie’s urban landscapes, in particular the “sausage of snow” covering the stairs of the M61 Rivington services.

When it came to the installations in the centre of the gallery space, the children all enjoyed Anna Gonzalez Noguchi’s Tsumumi: To Wrap, a scarlet binding between the two main gallery pillars; but it was her arrangement of a chair, table, armbands and coffee cup that prompted a furious debate between the kids on the nature of conceptual art. The middle one was particular fervent, and a little too Daily Mail for my liking, in his questioning of the artistic nature of the piece; and when the oldest offered the suggestion that the title, Support, meant that it was about things we need to get by, he was still not satisfied.

The youngest came to the rescue by dragging us off to see contributions by two artists from Project Art Works in Hastings. Albert Geere is an 80-year-old artist with profound learning difficulties, who has lived in institutions since he was two. The primary geometrics of his painting Storm, Sky, House had especially appealed to her seven-year-old eyes. Then there was an exhibit in the name of Andrew and Eden Kotting. I had first come across this father and daughter team after reading an Iain Sinclair essay about them in the London Review of Books in 2006. I had then seen Andrew's 1996 film, Gallivant, documenting a coastal journey around Britain by his grandmother and seven-year-old Eden. Eden was born with Joubert Sydrome, a rare neurological disorder, and has collaborated with her father on a number of projects. Now 26, Eden’s series of canvases on show at the Towner – Stargeezers - depict religious zealots gazing at the heavens and is accompanied by a short film, shot by her father, showing Eden at work.

Wrapped up in the film, I had let the kids give me the slip but I quickly found them again, at the making table in the foyer, expressing their own artistic talents; fairies, war and Daleks abounded. The debate about Gonzalez Noguchi’s installation was still raging, so we took it across the street to the Favoloso ice cream parlour and worked our way through four large helpings of support.

The East Sussex Open runs at the Towner contemporary art museum until 14 September 2014. Entry is free.

Posted by Andrew Watson at 6:25 PM No comments: 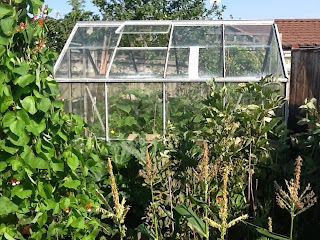 Nestling at the bottom of the garden, squashed between the fence and the vegetable patch is our greenhouse. It’s been through quite a bit in the time we have had it - footballs smashed through it, glass blown out during storms, numerous coats of Coolglass applied and removed – and it’s looking a bit worn these days: one pane of glass is held together by tape and the door has to be practically picked up to get in or out; but it is probably the most valuable piece of technology we own.

If a vegetable can be started off in the greenhouse it hugely reduces the risk of failure due to frost or pest, so pretty much everything we grow starts here: carrots, leeks, beetroot, sweetcorn, pumpkins, squash and brassicas begin life in trays or pots before being planted out at the allotment. Potatoes, garlic and onion sets are obviously sown straight into the soil, as are parsnips which never survive transplanting. And crops for the kitchen garden at home – broad and runner beans, peas, courgettes, lettuce – all start out on the greenhouse shelves to keep them clear of mice and slugs in their early days. Only radishes, rocket and spinach are sown into the soil.

Once the seed operation of late winter and spring is over, the shelving is cleared and the greenhouse becomes a jungle of summer produce. There was a time when we planted sweet pepper, aubergine and plum tomato plants but, even in the greenhouse, their fruits were slow to reach maturity and we decided to concentrate on faster growing plants – cherry tomatoes, such as Sweet Million, and several varieties of cucumber – that we could eat at the height of summer, rather than in September. A small corner is given over to Cayenne pepper plants to feed the family chilli addiction.

I cannot remember how much our greenhouse cost but I know that we got it at a cheap price in the winter from an ailing DIY and garden chain. It was a painstaking process assembling it, and it is a job for more than one person, but it has been worth it as the heart of our vegetable growing for the past eight years.

Greenhouses are generally available at no cost on Freecycle or the Friday Ad if you are prepared to dismantle and re-assemble yourself.

Posted by Andrew Watson at 9:23 AM No comments: 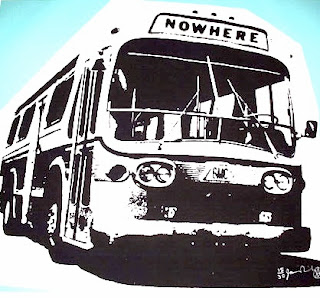 In yet more evidence of cuts to public services under the guise of ‘austerity’, East Sussex County Council (ESCC) is seeking to reduce its subsidy for bus services from £2.9m to £700,000 by April 2015. The proposals will see fares rise by 30%, services reduced and people in rural communities increasingly isolated. Some routes will change from a daily service to twice-weekly, and Sunday services will be cut.

As usual with ESCC, this latest proposal will particularly affect the most vulnerable: teenagers, young parents, those with disabilities, senior citizens and those on low wages for whom private transport is unaffordable. At a time when the council has ploughed £56m into the building of the Bexhill Link Road, such an attack on essential services for ordinary people seems inexplicable. But if you go to the ESCC website and take a look at the councillors in the key positions of power, you will see why. Middle-aged, male and well-fed, they could not be less in touch with the man on the Clapham omnibus if they came from Jupiter. It is, of course, East Sussex that is projected to soon have the first town – Uckfield - where nobody under the age of 45 will be able to afford to live.

I suppose we should always expect little thought for the less well-off from the nasty party: after all, it was Thatcher who said that any person still travelling by bus beyond the age of 26 should consider themselves a failure. But what of the ‘People’s Army’? The swathe of UKIP candidates elected to the county council last year are surely sticking up for ordinary folk? Of course not. Standing on a narrow policy of opposition to the EU and immigration, when it comes to a real issue that affects the daily lives of the people they are supposed to represent, they are clueless and powerless.

East Sussex County Council is consulting on its proposals until 28th September 2014. You can read the details and voice your opposition here.

Posted by Andrew Watson at 6:10 PM No comments: