Back to the Future

The Congress Theatre in Eastbourne, the largest on the south coast with a 1700-seat capacity, closed its doors last month whilst it undergoes an interior renovation and the construction of an adjacent welcome building that will house the box office and bar. Due to be completed in late 2018, the refurbishment follows the recent £2 million 5-year overhaul of the exterior. Opened in 1963, this Grade II* listed building has reached a point in its life where it clearly needs some love and attention.

The architects of the building were brothers Bryan and Norman Westwood. Up until then, their Surrey practice had largely been designing laboratories for research institutions and shops, most significantly for long-term client Austin Reed. Such was their expertise in retail design that they produced the definitive text, The Modern Shop, in 1952. After this, they were involved in a wider range of projects that saw them design Liverpool University’s arts precinct, housing for the Greater London Council and the Congress Theatre. It was the Eastbourne theatre that Norman Westwood was said to be most proud of.

Designed in 1958, the Congress was described by the late British-based American architect Rick Mather as having a “Festival-Hall-meets-East-Berlin interior and a dour exterior.” However, it reflected the prevailing trend of the age and its glass, metal and concrete frame frontage are a perfect example of post-war Modernist architecture, whilst its rear elevation owes much to the Brutalist school. Inside, its three-level foyer and the moulded balcony fronts and concealed lighting of the auditorium do, as Mather said, create a Soviet-style atmosphere. Indeed, the last time I was there was to witness the cultural orthodoxy of Reeves and Mortimer.

I first went to the Congress when I was on holiday with my mum and dad at Pevensey Bay. The building would have only been seven or eight years-old then and I do remember it being an exciting and impressive sight for a child of roughly the same age: towering above me on a warm summer’s night, light shining out from its pellucid front, it looked like the future. When I moved to East Sussex permanently a dozen years ago, time had dimmed that memory and the Congress looked as though it was something from the distant past. Next year, hopefully, the future will be back.

Posted by Andrew Watson at 5:32 PM No comments:

Sussex in the City 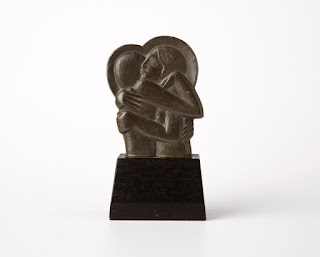 The common assumption is that modernism belongs to the city: as a form and a concept, it is popularly thought that modernist art, writing and ideas are essentially a reflection of the urban experience. There are dissidents, however: in The Country and the City, the Welsh cultural academic Raymond Williams rejected the opposition of the country as a pastoral idyll and the city as the heart of modernity. For Williams, the divide was a myth and there was an inextricable link between the two; he considered modernism a single tradition expressing a sense of common experience.

A new exhibition in London, in a neo-Gothic mansion by the Thames, would seem to support this idea of a link between the country and the city. Focusing on the extraordinary concentration of artists and writers in Sussex in the early 20th century, Sussex Modernism: Retreat and Rebellion challenges the idea of the countryside as an Eden and, instead, presents an area that inspired the experimental and the unconventional.

Created by the Bulldog Trust and curated by Dr Hope Wolf of the University of Sussex, the exhibition contains works from the historical Sussex homes of artists such as Bloomsbury Group painters and designers Vanessa Bell and Duncan Grant at Charleston, and the surrealist art and photography of Roland Penrose and Lee Miller at Farley Farm House in Chiddingly. Also featured is modernist art from the collections of Sussex galleries such as the Jerwood in Hastings and the Towner in Eastbourne, and museums at Ditchling and Brighton.

Many of the artists held and shared socialist beliefs and some saw Sussex as a retreat where they could rebel against traditional domesticity by living communally or alternatively. Sculptor Eric Gill was part of a Catholic community at Ditchling Common and his alternate lifestyle tested the boundaries of most people’s idea of common decency. What truly united the artists, though, was the pursuit of innovation and the production of work that challenged traditional ideas about the countryside in the modern age.

Sussex Modernism: Retreat and Rebellion is at Two Temple Place, Victoria Embankment, London WC2R 3BD until 23rd April 2017. Admission is free.
Posted by Andrew Watson at 8:04 AM No comments: 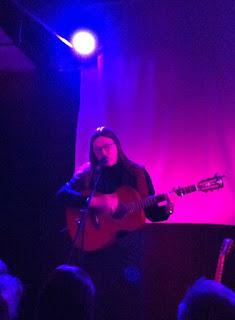 On stage at the Green Door Store in Brighton last night, everything about Nadia Reid’s set was intimate and understated: she asked for the stage lights to be dimmed an inch, for the monitors to be turned down a little and for the audience to shuffle a step nearer the stage to let the rest of the sold-out crowd in at the back of this tiny venue. And then there was the most intimate thing of all: Reid’s voice. Crystal clear and unaffected, she sings with a beauty and a purity that renders her folk/country songs tender and emotional without recourse to histrionics.

I was alerted to this young singer/songwriter’s debut album, Listen to Formation, Look for the Signs, early last year when it was given a glowing review in Mojo magazine. It was only when it failed to figure in 2016 ‘best of’ lists that I discovered that it had been released the previous year; further digging revealed that it actually came out in 2014 in her home country of New Zealand. That she had made such an assured and mature debut at the ridiculously young age of 23 was further evidence of her prodigious talent. Added to this, her admission that she took seven years to write the songs for the album meant that her debut was the sound of her whole adult life: small wonder it is such a considered and confident album.

With Reid on acoustic guitar and Sam Taylor accompanying her on electric guitar, they replicated the haunting Appalachian sound of the album superbly: Holy Low was dedicated to a baby in the audience (yes, a tiny baby) who was born to the sound of Reid’s songs and the sublime Ruby (“Where did my love go? He was the sailor of my ship”) was played at the audience’s request. Even though they were performing as a duo – it is financially prohibitive to bring the whole band over from New Zealand, Taylor told us when we chatted to him after the gig – rockier tracks, such as Reaching Through, were given full rein. The title track from the new album, Preservation, was an indication that the new songs are just as ethereal and, with her material attracting a lot of airplay on 6 Music, she may not be able to remain understated for much longer.

Preservation is released on Basin Rock on 3rd March.

Posted by Andrew Watson at 4:45 PM No comments: