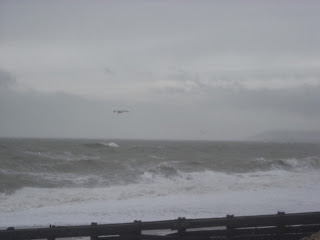 The persistent December rain has meant that orchards and fields, hillsides and woodlands have become sodden quagmires, almost impossible for walking. When I proposed to the family that the final walk of the year needed to be a rain-soaked coastline trek on sturdy pebbles, to blow away the Christmas cobwebs, my idea was met with dumb incredulity. Only the dogs seemed interested: but the short-legged one is Scottish and stubborn and I knew he would renege on his word as soon as he felt a stiff breeze; the long-legged one will go anywhere, in any weather, if it means being out of the house and getting sight of a sausage-flavoured dog treat; so only he made the cut. Luckily, he cannot understand the shipping forecast: “Thames, Dover, Wight: southwesterly gale force 8 increasing severe gale force 9 imminent; rough becoming very rough; rain or squally showers; moderate becoming poor.”

With trees blown down, homes flooded and power out in a host of places, there is much for people in south coast counties to worry about. If the litany of the shipping forecast can usually make the threat of force 12 hurricane winds appear benign, getting Alan Bennett to read it on Radio 4 this week was a masterstroke of panic management. His soft Leeds cadence made it sound as though we will never know fear again, even if the forecast was one from October. The roll call of sea areas – Forties, Cromarty, Forth…Sole, Lundy, Fastnet…Shannon, Rockall, Malin – is poetic balm to soothe the soul.

My plan was to start early on Cooden beach, in sea area Dover, and walk far enough west until I was in sea area Wight. If a trans-sea area walk seemed ambitious, the location of the boundary between the two, at Sovereign Harbour in Eastbourne, made it a reasonable round trip of 10 miles. But when I arrived at Cooden, it was high tide and the gale forecast for the coast was already battering the beach. The strip of pebbles between the crashing waves and the coastal road was so narrow that I thought the dog might be swept away or run over; but we made it through to the safety of the broader beach.

There is something strangely attractive about a coastal walk on a wild winter day: the lowering sky, the salty sea-spumed air limiting the vision, and the lack of any other people all make it a beautiful but desolate experience. And this morning’s Beaufort scale force 9 gale, although not quite full in the face, made westerly progress slow; even a solitary gull struggled. But we carried on past the caravan parks of Norman's Bay - as deserted as cemeteries - and the residents of beach-front houses, peering out anxiously at the turbulent swell.

I felt exhausted as we neared Pevensey Bay, but a fortifying glimpse of brightness between the clouds spurred me on. The tide having receded a little, we were able to walk on the more compacted surface nearer the shoreline and the dog even attempted a frolic or two. But as we left Pevensey, the coast curved southwards and the relentless gale became a headwind. With the return walk in mind, my resolve deserted me and, a mile from the harbour, we turned around.

With the wind behind us, we veritably sailed back to Cooden; and, of course, by the time we returned the weather was abating: “Thames, Dover, Wight: southwesterly 5 to 7; moderate or rough; rain then showers; moderate becoming good.”

The Ghosts of Christmas 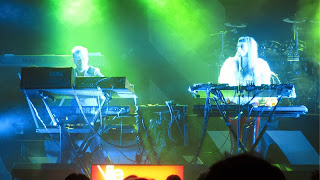 Sussex duo, Vile Electrodes, have produced a seasonal slice of pop, with their latest offering The Ghosts of Christmas, that beautifully combines the Shangri-Las’ Leader of the Pack, Soft Cell’s Say Hello, Wave Goodbye and Dickens’ A Christmas Carol. With a name punning the bohemian writer of erotica, Anais Nin, vocalist and sometime-milliner Anais Neon intones, in an unmistakably English accent, a festive tale of death and break-up to Martin Swan’s backing of swathes of shimmering analogue synthesiser.

Not being reality television contestants or having their track featured in an advertisement, the St. Leonards-on-Sea group are unlikely to trouble the Christmas number one slot; but not all festive songs are aimed at the mass market, especially ones about your true love dying on Christmas Eve.
Posted by Andrew Watson at 11:13 PM No comments:

The Past is a Foreign Country 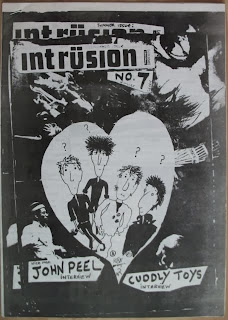 About a thousand years ago – well, thirty five but it feels ever so much longer – I wrote a punk fanzine, called Intrusion, with three of my mates. It started in 1978 and lasted for eight issues. It was standard Sniffin’ Glue-inspired fare: the first few editions were single-sided Xerox and it then moved on to the sophistication of double-sided printing. Pages were a mixture of hand-written and typed, with felt pen and Letraset headings. Photographs were rarely original and covers were generally cryptic collages. We mainly sold it through a small ad in the back of the NME, but Rough Trade and a couple of other record shops stocked it successfully on a sale or return basis.

Looking at the excellent Essential Ephemera recently, a blog that unearths forgotten fanzines from the punk era, I came across a post on a fanzine called Toxic Grafity. It prompted me to recall that we had helped its writer with his earlier version, No Real Reason. When I say helped, I think we were involved in getting the first issue photocopied; it then developed into a strong Crass/Poison Girls anarcho-punk fanzine with much more direction than our own. But it made me search online to see what place Intrusion fanzine had secured in the annals of punk. There were three results of my Google search: it had made it into that exhaustive document of punk, Bored Teenagers, and then there was a review, taken from issue 5, of a gig at the Croydon Greyhound on a Penetration fan website. The last result was on eBay; a punk memorabilia seller was offering a copy of issue 7 and there had been one bid of £10. Delighted to see that our modest offering still had currency in the modern world, I went up into the loft and found the bundle of fanzines that I have carefully kept. There, amongst copies of Sniffin’ Glue and Ripped & Torn, was one of each of the eight editions of Intrusion fanzine.

If the past is a foreign country, having your sixteen-year-old self reflected back at you through your juvenile punk ramblings is an uncharted corner of the solar system. It is a mixed experience - at once heartening, baffling and embarrassing. The writing was generally good and the content shows that we were not just playing at it. There were interviews with John Peel, the cartoonist Savage Pencil, band members from Siouxsie and the Banshees and Penetration, and lesser known south London local bands Rodney and the Failures and The Vamp (the latter featuring drummer Max Splodge, soon-to-be lead singer of top ten-hitters Splodgenessabounds). There were live gig reviews of all of those bands, and The Clash, Adam and the Ants, The Adverts and The Mekons, as well as quite perceptive pieces on the recorded output of Alternative TV, Wire, PIL and even David Bowie.

For a reason I have no recollection of, I was writing under the name “Andi Recondite” and some of the pages were nothing more than a puzzling collection of random images and scribbles. More embarrassingly, there was a lot of conflicting and shouty “punk’s dead/punk’s not dead” polemic, which got worse in the later editions and was probably the reason that the fanzine floundered. Interviews were generally typed-up verbatim, like a script, and were not that incisive. Cleary running out of questions, the Banshees started to interview us. (SEVERIN: What’s your favourite Banshees song? ME: All of them!) Oh, dear. But it was passionate, angry and – most importantly – self-produced. And there was some well-intentioned, but naïve, politics. Items on Rock Against Racism and the Anti-Nazi League, articles on the Persons Unknown anarchist trial and an apposite picture of an imminent Premier Thatcher with a swastika on her forehead and the Mekons’ lyric “we know what we know and tomorrow is an empty day” underneath.

Issue 7, the one up for sale on ebay, does not stand out. Strangely, it has a cartoon drawing of the four writers on the cover (that’s me, second left) but, that apart, it does not seem to be different from any of the other editions. Maybe it is collectable because of the Peel interview, something he did not do that often. I remember we arranged to meet him in a pub around the corner from Broadcasting House, and he was mortified that The Adverts and Wire were in the pub. He was at great pains to point out that it was a coincidence, that he did not hang out with bands. This is borne out by the rather churlish revelations of Mark E. Smith and Morrissey that, despite being championed by Peel, they had little contact with him. I think they are rather missing the point; as are some others: when I went back to eBay, the winning bid, for an original edition of a fanzine produced by some teenage punks on a council estate, was an inexplicable £124.

Posted by Andrew Watson at 7:32 AM No comments: