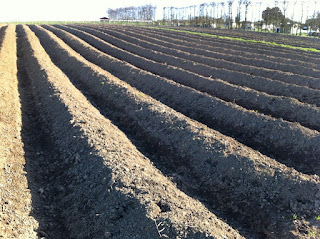 Having grown up on a council estate in the south-eastern corner of the capital city and always been a lover of the urban environment, it was a surprise to me on moving to the East Sussex countryside a dozen years ago to realise that my appreciation of the cityscape had been overtaken by the feelings the rural aesthetic could inspire in me.

Whereas in the city it was those large-canvas sights - the twinkling lights of the office monoliths on the Isle of Dogs viewed from Greenwich Park, the sunset view up and downriver from Waterloo Bridge – that stirred me, in the countryside it is the smaller-scale that stimulates.

Not for me Arcadian pastoral vistas and roses-around-the-door villages much-loved by traditionalists and those who would seek to preserve the countryside in aspic; instead, it is those minor details, the simple pleasures that take me unawares: a gently curving bend in an undiscovered country lane that hints at promise around the corner; a house on a rising piece of land newly revealed behind a freshly-cut hedge; an abandoned piece of agricultural machinery in a field symbolising the power of nature in its relationship with man. And on a spring afternoon this weekend, a just-ploughed asparagus bed, with its deep shaded furrows and sunlit ridges streaming away from me, reminded me that, in this week of weeks, the horizon is filled with the unknown.

Posted by Andrew Watson at 5:15 PM No comments: 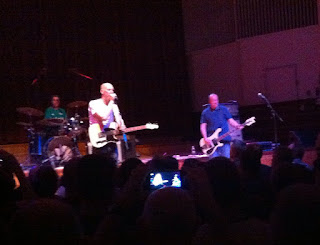 One of my kids gave me a 'proud parent' moment last week. This was not one of those sports day/nativity play/school report type of reasons for a feeling of puffed-up pride. No, this was altogether more prosaic but no less important in my eyes. My 12-year-old son was doing his homework in the kitchen and listening to music at the same time. Nothing remarkable in that but what caught my attention was the song that was coming out if his iPad: as he wrestled with his algebra, he was doing it to the soundtrack of All I Want for Christmas is a Dukla Prague Away Kit by Half Man Half Biscuit. I could not have been more happy: this was real education. He told me that he had downloaded that track and Time Flies By (When You're a Driver of a Train) to his Deezer playlist (no, I don't know either). However, he had not discovered these songs entirely independently as, with an eagerly awaited Half Man Half Biscuit gig coming up, I had been playing the Birkenhead band a lot lately; but it was nice to know that my children listen even if it's not to the "hang-up-your-clothes-and-tidy-your-room" stuff.

On Friday night, the gig finally came around at the Assembly Hall in Worthing, a venue I had never been to before; not surprising I suppose, as the forthcoming attractions flyer I was handed on the way in indicated that its bread and butter is tribute bands and revival acts. The latter is not a term that could be applied to Half Man Half Biscuit: despite splitting up in 1986 after only being together two years, they reformed in 1990 and have been making music continuously ever since. Favourites of John Peel, Nigel Blackwell's band occupy a unique place in punk and post-punk music with a repetoire of songs that don't take themselves or anybody else at all seriously.

Drawing on the minutiae of celebrity culture, the set starts off with Bob Wilson Anchorman and soon moves further into singalong territory with Fuckin' 'Ell It's Fred Titmus. It's not all minor telly stars and sportsmen, though; Blackwell is a sharp satirist, too. The perfect Paintball's Coming Home is like a musical Martin Parr photograph in its biting observation: "they go ten pin bowling after work and they're getting married on a Caribbean beach...they've got a German Shepherd dog called Prince, the one called Sheba died." And we all join in on the pay-off line, "If I'd known they were coming, I'd have slashed me wrists." There is a warmth to Half Man Half Biscuit songs as well, albeit a nostalgic one. We get a glimpse into that world of broken Subbuteo players and dodgy Scalextric transformers on Dukla Prague and the title track from the Trumpton Riots EP plays on our childhood memories; and pretentiousness is punctured with the rousing Joy Division Oven Gloves, complete with oven glove waving from the audience.

Clever and funny as the lyrics are, it is all superbly underpinned by the band's sound. Neil Crossley (who incidentally is the spit of Dudley Sutton these days - I'm sure there's a song title in there somewhere) and his rumbling bass combines superbly with Blackwell's choppy rhythm guitar and Ken Hancock's ("the first man in Wallasey to have a continental quilt") lead guitar to create a powerful post-punk racket; and as if to confirm it, they play a raucous cover of Camper Van Beethoven's mid-80s classic, Take the Skinheads Bowling - another one for my son's musical education.

Posted by Andrew Watson at 9:58 AM No comments:

Shuttling backwards and forwards to Eastbourne on Saturday, ferrying kids to various activities, I was struck by how different the light could be over a stretch of 10 miles. The faint amber glow of warm spring sunlight up on the ridge above the Pevensey Levels soon turned to a smoky haze on the marshes and then numerous shades of grey that blended sea and sky as I reached the misty coast. Later in the day, the sun had conquered all and the sky was iridescent violet and peach.

With light on my mind and time to kill before my final pick-up, I was able to pop in to the Towner and view its current exhibition, A Certain Kind of Light. I always enjoy the hour before closing at a gallery as you can usually have the space pretty much to yourself; yesterday was no exception. Bringing together artworks from over six decades, the exhibition shows how artists have explored various aspects of light, from its power as a source of energy and illumination to its transient and transformative nature.

If the range of responses is broad, so too is the diversity of form: encompassing sculpture, installation, video, photography and painting, the exhibition is a stimulating and satisfying experience. David Batchelor's Festdella, a festive tower of illuminated coloured plastic bottles, greets you at the door signalling the warm and celebratory quality of illumination. I spent 10 minutes at Anish Kapoor's untitled mirror trying to work out whether it had a flat surface that gave a three-dimensional illusion or its concavity actually penetrated the wall; the notes suggested the latter but whichever it was, there was a typically enigmatic depth to the work.

Rachel Whiteread's semi-translucent resin cubes are more an exploration of space than light; moulds of childhood hiding places under chairs, they are reminiscent of her 1993 work, House, that mourned the lost space of the interior of a demolished house. Kate Paterson's Totality, a mirrorball reflecting eclipses around the gallery space was disorientating, as was Runa Islam's video loop of a photographic negative of a woman's intense gaze.

More traditionally, I enjoyed Roger Ackling's patterns of sunlight burnt with a lens onto driftwood and TV Room, Paul Winstanley's almost photographic monochrome painting of light reflecting from the screen and ceiling in a deserted television room in a University of London hall of residence. Another painting that stood out was Elizabeth Magill's haunting study in oils, Without, a deserted and darkened landscape lit only by the stars in the night sky.

As the five-minutes-to-closing announcement was being made, I had just reached the final painting. L.S. Lowry was famed for his populated industrial landscapes of his native North-West, but in later life he crossed country to paint a series of seascapes inspired by the North Sea. Seascape 1965 contrasts the grey of the sea and sky with the bleached crests of the breaking waves and an intense white light that radiates out from the barely perceptible horizon. For all its desolation, the light seems to signify that hope is out there somewhere.

A Certain Kind of Light is at the Towner Gallery, Eastbourne until 7th May 2017; admission is free.

Posted by Andrew Watson at 9:15 AM No comments: