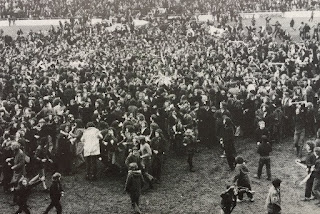 I’ve hardly written about football since I started this blog. Before then, I probably thought about my team as often as men are supposed to think about sex; but these days, when it comes to football, I am the possessor of a long-held personal faith rather than someone who regularly and devoutly practices an organised religion. I’m a bit like that about sex, too. However, I have been prompted to reflect on my association with football because 30th August will mark the fiftieth anniversary of my first match at The Den to watch Millwall. That day, taken by my dad at the age of seven because I had started to express a fondness for the black and white striped shirts of Newcastle United from pictures in the newspaper, we lost one-nil to Leicester City and I left the ground feeling unimpressed by what I had seen; but it was to be the start of a relationship with a club that has at times defined me, has often exhilarated me but has also, on occasions, made me downright bloody miserable.

I am a third-generation Millwall supporter: my paternal grandad began attending matches in 1910 when the club relocated from the Isle of Dogs to a site south of the River Thames near his home in New Cross; he started taking his son to games in the 1930s and my dad would tell me regularly of the great FA Cup run of 1937 that saw Third Division South Millwall defeat Chelsea, Derby County and Manchester City - all First Division clubs – in front of 40,000 plus crowds at The Den before losing in the semi-final to Sunderland.

After that first match in 1969, I went to most home games with my dad (apart from the 1970/71 season when he disappeared for a year) until I started going with my mates in 75/76. That season was also my first as a season ticket holder - something that I continued up until I moved out of London in 2005 – and was remarkable because it was my first taste of success with promotion to Division Two and it was achieved, in no small part, thanks to the contributions of two skilful young black players, Trevor Lee and Phil Walker, who had been signed from non-league early in the season. This was a rarity then and predated West Brom’s ground-breaking trio of black signings by a couple of years; it was a bold and progressive move by the club and sent out a positive message to the local community at a time when the National Front was on the rise.

From the mid-seventies, my dad attended matches sporadically – I think he felt he had successfully handed on the baton of support – with his last game being the final one at the old Den in 1993 before the club moved to a new all-seater stadium a quarter of a mile away. He did get to see them play in the top flight – the day we won promotion to the old First Division at Hull City in 1988 I went straight from Boothferry Park (well, via the pub) to his house and we stayed up until the early hours celebrating – but he never saw them at Wembley. When Millwall finally got to play at the original Wembley Stadium in the Auto Windscreens Shield Final against Wigan in 1999, he was nearing the end of his life in a nursing home; but he was lucid enough to read the programme and look at the photographs I took for him on the day.

These days Millwall never seem to stop playing at the new Wembley and those play-off finals, and the 2004 FA Cup Final at the Millennium Stadium in Cardiff against Manchester United, are probably the peaks for a Millwall supporter. Although, my fondest memories are not necessarily those that resulted in success: I can still remember the names of the whole of the white-kitted 71/72 team and recall the dazzling football of Possee and Bridges that year more than I can remember the ache of disappointment when we missed promotion to Division 1 by a single point at the season’s end; and I’ll never forget taking the lead at Anfield, when we were finally in the First Division, and singing, “We’re gonna win the League”, to the amusement and bemusement of the home crowd.

Of course, there have been more troughs than peaks and for most of us the trials of being a Millwall supporter have not been confined solely to disappointments on the pitch. Travelling to away games, the police assume the worst of you and the inhabitants of every town or city you arrive in seem to want to kill you. I can’t think why. My most intense period of following Millwall away from home was in the 80s: at the end of the decade because we were playing all the big teams, at the start of the decade - when we were terrible - out of a perverted sense of loyalty. There was some sort of badge of honour to be earned from travelling to Plymouth for a night match, arriving late at half-time to find Millwall already one-nil up and then watching them capitulate to three home goals in the second-half before making the long journey back to London; or going to Newport County in January only to dish out abuse to your own disgraceful journeyman players, Sam Allardyce amongst them, who were all kicked out when George Graham took over as manager a few weeks later and saved us from relegation to Division Four; or being one of less than 50 fellow-travellers making the 600 mile round trip to Carlisle for a meaningless late-season game.

Now I no longer live in London, time and money means I only get to a handful of matches a season; and I’m having trouble handing the baton on to the fourth generation. Of my three kids, only my youngest son showed an interest in coming with me to games but his enthusiasm waned. It didn’t help that he started going when we had season after season of relegation battles in the Championship; in fact, he was eight when he first saw Millwall play but a combination of poor form and irregular attendance meant he was eleven when he first saw them win a match. Now he is older, his interest is returning and he says he wants to go this season; he was born in south-east London and, when he has so many peers at school who support Liverpool and Man City only because they are successful, he understands that Millwall means something to him.

We won’t be at the home game on 31st August against Hull to celebrate my 50th year as a Millwall supporter: a lack of forward planning means I’m already committed to spending the weekend in a field somewhere in Wiltshire drinking cider and listening to live music; but we will be at The Den for the anniversary of my second match. That was a couple of weeks later against Carlisle United and it was also the debut of eighteen-year-old Londoner Doug Allder on the left wing for Millwall. He tormented the Carlisle defence that day and created most of the goals as we came from behind in an exciting match to win 4-2 with the crowd roaring in full voice; and as cross after cross came in, a seven-year-old boy, behind the goal at the Ilderton Road end with his dad, was converted.

*The picture at the top shows Millwall supporters on the pitch after the final home game of the 1971/72 season against Preston. News of promotion rivals Birmingham's defeat had led us to believe we had been promoted to Division One. It turned out to be false and Birmingham went on to win their game in hand at Orient and were promoted instead. I am in the photograph at the bottom in the middle facing away from the celebration.

Posted by Andrew Watson at 7:52 AM No comments: