Postcards With An Edge 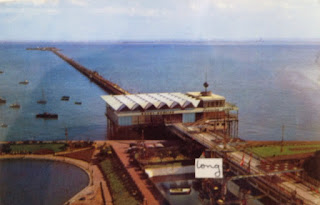 Vintage postcards seem to be a thing these days: no bric-a-brac stall or antique shop is complete without a box of random postcards from the second half of the last century to thumb through and intrude on the past life of people we have never met; Tom Jackson's Twitter account and recently published book, Postcard From The Past, features a series of front images, each accompanied by a very funny Victoria Wood-esque sentence - "Went to see Connie in her new bungalow", "The sight of my box made me homesick for you", "It's all lager and cigars here", etc - from the message on the reverse; and now, tucked away in the first floor gallery at the De La Warr Pavilion, is Roy Voss's delightful exhibition of postcard collages, All The World's A Sunny Day.

Displayed in linear fashion around three walls, Voss's postcards have had a single word cut from the message, and then reversed, so that it appears at a seemingly random point in the front image. Sometimes the word relates literally to the picture, as in 'long' on a postcard of the world's longest pier at Southend-on-Sea, and sometimes a pair or series of cards form a more allusive narrative. I enjoyed the humour of the words 'trip' and 'fall' on postcards of the Matterhorn and Snowdon, respectively, and because of its local interest I was drawn to the dark edge given to adjacent Beachy Heads with the addition of the word 'on' at the cliff top on one, and 'off' at its foot on the other. In fact, Voss seemed to favour prepositions with 'up', 'down', 'over' and 'out' appearing on several images in the exhibition.

As Voss has used postcards from 1960 to 1980, the images had a youthful familiarity for me and I may be guilty of rosy nostalgia for a means of communication that seems to be coming to an end; but the exhibition also resonated less happily with me because of the memory of having to force out every single word on those postcards I was made to write to relatives on childhood holidays.

All The World's A Sunny Day is at the De La Warr Pavilion, Bexhill-on-Sea until 8th Ocober 2017.

Posted by Andrew Watson at 6:00 PM No comments: 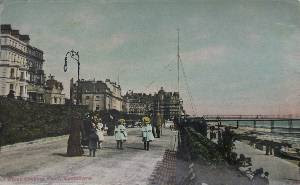 In August 1895, the ashes of Friedrich Engels, co-author of The Communist Manifesto with his friend Karl Marx, were scattered into the sea from the top of Beachy Head at Eastbourne. This may seem surprising given that the philosopher, writer and businessman is more associated with Manchester, having lived there between 1842 and 1870, broken only by a five-year European spell in Paris, Brussels and Cologne.

Engels, born in Germany in 1820, was the eldest son of a textiles manufacturer. His wealthy father sent him to England to work in one of the family factories with the hope that exposure to the world of business would rein in some of his liberal political views; it had the opposite effect.

In Manchester, he met a young working class woman, Mary Burns, whose radical opinions were to be an influence on Engels. Burns was his guide to the slums of the city and enabled him to write The Condition of the Working Class in England. Published by Marx in 1845, it exposed the grim effects of capitalism. Engels and Burns stayed together until her death in 1863. They never married as they were both opposed to what they saw as a bourgeois institution.

In 1870, Engels relocated to London where Marx already lived and the two worked on Das Kapital, the masterpiece of Communist philosophy. It was in this stage of Engels’ life that his association with Eastbourne began. The two friends were great enjoyers of the Victorian seaside and they visited many resorts. Margate, Ramsgate and the Isle of Wight were all regular destinations but Eastbourne was where Engels holidayed for extended periods during the summers after he had retired from business. He often stayed at 4 Cavendish Place, just opposite the pier, and it was here that he spent the last few weeks of his life on doctor’s orders before briefly returning to London to succumb to throat cancer. Of all the places Engels had lived, Eastbourne was his favourite and his last wish was that his ashes be scattered there.
Posted by Andrew Watson at 5:11 PM 1 comment: 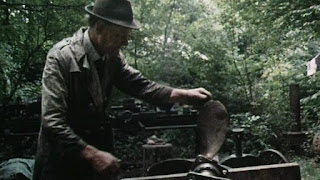 In the summer of 1969, a young Sussex filmmaker took up residence in a van in a wood at Swanbrook, near Chiddingly. He was there to film a family - the Pages - who lived in an isolated and ramshackle house that had no electricity or running water. The head of the family was Mr Page, a gnomic man in his seventies, who lived with his four grown-up children - two boys and two girls - and earned a living repairing old farm machinery with his sons. His daughters kept house, such as it was, gardened and played musical instruments.

The 65-minute documentary that Phillip Trevelyan finally completed in 1971, The Moon and the Sledgehammer, offers a fascinating glimpse into a way of life that was already long dead when Trevelyan befriended the family having heard of them through an acquaintance. The film is shot using natural light, which gives it a magical, otherworldly quality; it has no narrator but is instead voiced with the family members’ answers to Trevelyan’s interview questions. However, Mr ‘Oily’ Page is its star and it is his expression of his rejection of modern technology and loyalty to traditional tools and mechanics that provides the film’s title – the first moon landing was a contemporaneous event.

The family’s self-sufficiency and woodland life seems idyllic and the film has acquired a cult following for its back-to-the-land ethos but there is a sense from some of Oily’s children that life was passing them by and they longed for escape. After Mr Page and his eldest son had died, the daughters were moved into social housing in the 1980s, leaving the remaining son to cling on in the wood. What has become of them now is not known; it is thought that, just like their simple existence, they have not survived into the 21st century.

The film and a documentary about its making are both available on DVD here.
Posted by Andrew Watson at 5:20 PM No comments: