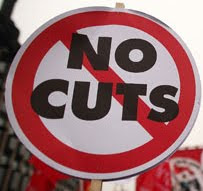 Having allocated £40m of its budget on the road to nowhere – the Bexhill/Hastings Link Road – East Sussex County Council is now gearing up to saving £60m over the next three years by cutting services used by the most vulnerable in the county. The fact that it is sitting on reserves of over £400m make the decision that they are preparing to take at the next meeting of the full Council all the more scandalous.

Under the budget proposals cooked up by the Council’s cabinet committee, children with special needs, disabled people, victims of domestic violence, older people, young people at risk, young parents and the homeless will all have services reduced or cut. If you look at the make-up of the cabinet – white, middle-class and middle-aged down to a man (and I mean that literally; no women, let alone a young person or someone from a different background) – it does go some way to explaining how a decision that requires such a lack of empathy could be made. That, and the fact that over the past two years it has been made clear from the very top: it is the same old nasty Tory party attacking the weakest targets they can find.

However, Lewes Stop the Cuts, a coalition of individuals, trade unions, charities, students and community groups, is committed to fighting these cuts to public services. A lobby of the next Council meeting is being held on Tuesday 12th February. Any individuals or organisations who can support this lobby should meet at the main entrance to County Hall, Lewes from 9am onwards to let the councillors know that those they think are the weakest are - together - the strongest.
Posted by Andrew Watson at 2:07 PM No comments: 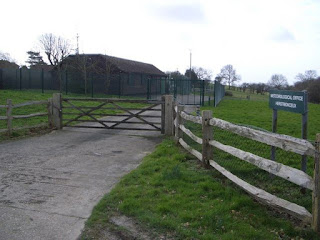 Now that the story of the death of Princess Diana is completely exhausted of any news mileage, some august journals have become fixated with the weather. It is strange that middle-market tabloids, dyed-in-the-wool climate change deniers, should use the extremes of weather we have experienced over recent years to make their daily bread, but they do. The endless rain and the countless flood alerts have been the subject of obsessive coverage throughout 2012 and, in the grip of winter, the potential for cold weather has got them very excited. They feel safer with the cold; their attitude seems to be: Global warming? Really? When it’s that cold outside? And now, with forecasts of snow, their shrieking has reached hysterical levels.

I used to have a similarly childish obsession with the weather – when I was a child. As a kid in London, I was familiar with the place name Herstmonceux for two reasons. First, I was slightly annoyed with it for nicking the Royal Observatory from up the road at Greenwich. Even though it happened in 1947, I felt I had somehow been deprived and that all the tourists milling about outside the building at the top of Greenwich Park were being conned. The second reason that Herstmonceux was familiar to me was because it frequently cropped up on the weather forecast; well, not so much the forecast, as the review of the day’s weather that Jack Scott or Bill Giles sometimes gave at the start of a forecast. If there had been extremes of weather – temperature, sunshine, rain, snow – very often Herstmonceux would be mentioned as having the highest or lowest of whatever was being measured. I am sure that other places were mentioned just as regularly, but an observatory thief with an unpronounceable name with the letter ‘x’ in it, stood out. In my naivety, I assumed that the Meteorological Office knew what the weather had been like across every inch of the land, and I was fascinated with the idea that Herstmonceux was the epicentre of extreme weather in southern England. I never made the connection between the observatory and weather; and so it never occurred to me that the reason it experienced more sunshine or the lowest temperature was because there was a weather station there to measure these things.

In 1990, the Royal Observatory moved again to Cambridge but gradually throughout that decade its various functions – astronomy, particle physics, hydrography – were scattered to different locations. I am not sure when the Herstmonceux weather station would have moved but it is now in West End, a minor road leading out of Herstmonceux village to Gingers Green and Stunts Green. Since ending up living in Herstmonceux, I pass it every day I go to my allotment. It is a very unassuming single-storey wooden building, protected by tasteful racing green metal security fencing as it is unmanned and automatic. Equipment there measures air temperature, atmospheric pressure, rainfall, wind speed and direction, humidity, cloud height and visibility. The station produces constant observations and transmits them to the Met Office in Exeter; the minute-by-minute readings can be accessed on the Met Office website. It is said that weather balloons are launched twice daily from the station but I have never seen one. A friend has, and sighting one myself has now become a minor obsession. The Met Office has over two hundred weather stations around the country but only a handful are still manual. It’s a shame: I think I would be quite good at looking out of the window of a wooden hut and then phoning in the news that Siberian Snow Chaos Hits Britain.

Posted by Andrew Watson at 4:51 PM No comments: 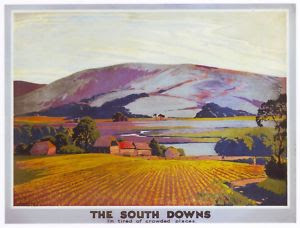 Arriving at Firle Beacon, exposed to the full westerly current as it travelled across the landscape to meet the land mass, this was Ridler at his most free. Away from the cell’s dimensions of the caravan, the narrow minds of the village, the puritan judges of a world stiff with conformity, he was alive. The ochre sun, now drowned in the horizon, coloured the very top of the spiralling clouds above him. He discarded his jacket and shirt and - bare-chested, arms spread wide, head thrown back – felt the strong, warm breeze on his stigmatised skin. Below him, the panoramic vista he had grown to rely upon: the wheat-packed fields mapping away from him to the cloud-mirrored ridge of the Weald; the county town of Lewes, cradled in the creases of the surrounding hills; the tied villages, standing firmly at the centre of their feudal estates; and the Tower, that single turret of sturdy split flint that so mocked his own Englishman’s castle. The solid and unchanging landscape of tradition, of England. Ridler, himself born so English, had made himself so foreign; and now he felt connected to this pastoral idyll, this England, but not to its people. He inhaled deep and long through his nose and exhaled loudly and capaciously from his mouth until his breath became first a bellow and then a roar. A roar of affirmation, a roar of freedom, a roar of innocence: he could not be blamed for the way the Writer’s brief stay had ended. Way down in the village of Firle, had anyone looking up been able to see or hear clearly, they would have made out a variegated bestial figurehead on the bow of the Beacon, sailing away in the fading light, proclaiming the clarity of his conscience.

Replacing his jacket and shirt, Ridler draped a scarf over the top of his head and held it in place with a battered, broad-brimmed felt hat he had taken, with the scarf, from his jacket pocket. Tying the scarf under his chin, in such a way that only eyes, nose and mouth were visible, he began the climb down to Firle picking his way carefully down the gradient. He could see the car lights on the Lewes Road, fuller now but still a dull, lazy amber, and a cloud of steam as a train was leaving Glynde station. These – the road and the rail - demarked the two lines he would need to re-cross before he could feel less threatened. When he would be walking in the cool and quiet of the tree-lined lanes that led him home, he would be happy. As he descended, the stiff breeze of the Downs subsided and the flat land rose to meet him.
Posted by Andrew Watson at 6:38 PM No comments: